The Chinese government plans to monitor its people with a comprehensive social credit system.” The goal is to promote honesty and sincerity in order to promote economic and social progress. In the process, those who betray trust are to be severely punished. 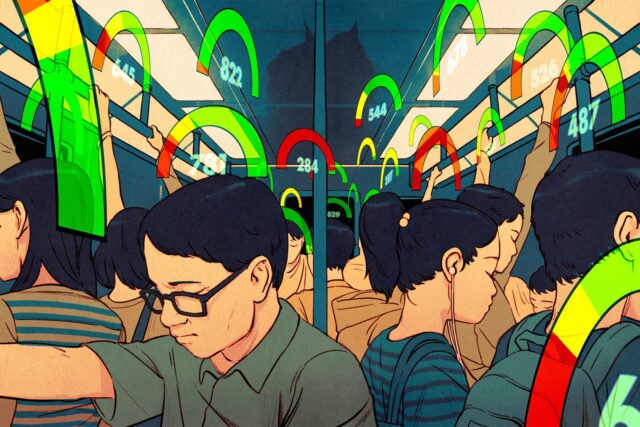 China is currently busy creating a digital data monster with tentacles extending into every aspect of life. This is causing concerns about the rampant frenzy to collect data and how it will be handled. The Chinese social credit system is officially scheduled to go into operation in 2020. From then on, not one of the country’s approx. 1.5 billion inhabitants will be able to escape the state’s rating system.

Education in “goodness”
Zhang Zheng, director of the China Credit Research Center at Peking University, is an important thought leader and theoretician of the Chinese social credit system. His mindset is rooted in his socialization because the economics professor had initially studied mathematics and natural sciences, which requires a rational and analytical way of thinking. However, dealing with human beings and the problems of society requires a broader, more differentiated approach, which is often difficult for dedicated natural scientists. Social sciences are more than just ones and zeros, black and white, right and wrong, good and evil, but the Chinese social credit system is based precisely on this simplified dualistic way of thinking.

There are two kinds of people in this world: good people and bad people. Now imagine a world where the good ones are rewarded and the bad ones are punished — Zhang Zheng zitiert in Martin Maurtvedt, “The Chinese Social Credit System: Surveillance and Social Manipulation: A Solution to ‘Moral Decay’?“, Department of Culture Studies and Oriental Languages, University of Oslo, 2017, p. 1.

Zheng is convinced that the Chinese social credit system, i.e., socialization as a “good” person with the help of digital tools, will become a sustainable cornerstone for the moral order of Chinese society. This system is intended to improve the morals of society. Whether the everyday morals of the people or the business ethics of companies, the system is supposed to that the rules are followed. This has particularly obvious consequences on individuals: good citizens would be rewarded and favored, while bad ones would be sanctioned with severe restrictions in daily life.

Structure and function
The Chinese social credit system is based on centralized databases containing such records as medical and court files, online shopping, posts on social networks, internet search queries, travel plans, and purchases with credit cards or payment apps. These records are then analyzed and weigh this cluster of data to come up with a single score. Companies and institutions will have no choice but to make their data available to the system. However, there won’t be much need to put pressure on Chinese companies, since there are already voluntary systems in place such as Alibaba’s Sesame Credit (with over 450 million active users), Tencent (operator of the successful Chinese messaging, social media and mobile payment app WeChat), and Baidu. China’s private internet companies have indicated that the Communist Party may use their compiled data and cutting-edge technologies because, in return, they will gain access to previously inaccessible government databases.

Looking at Sesame Credit, not only payment behavior but also “habits or preferences” and “personal networks” can influence creditworthiness. According to Li Yingyun, head of development at Sesame Credit, someone who plays video games ten hours a day is classified as a sluggish person, but those who buy diapers frequently are likely to be a parent and are therefore willing to accept a higher degree of responsibility. Ambitious gamers risk a lower score, while those who are responsible get a higher one. It’s also worthwhile to pick friends with high scores because these can help increase your score. However, if your friends have low scores, you risk losing points. If you are looking for a partner, you can advertise with a high score, because Sesame Credit cooperates with Baihe, China’s largest online dating agency. This means, however, that people with low scores will inevitably remain single.

Pilot operation already running
Companies are not the only ones that are already heavily collecting, processing, and evaluating data. Some three dozen Chinese cities are already experimenting with different social credit systems. For example, Rongcheng, a city of about 670,000 inhabitants on the east coast, has been operating a social credit system since 2014 regarded as a showcase project for a China-wide system. With their Honest Shanghai App, Shanghai operates another popular system, which has also implemented facial recognition. To register, the individual’s is captured with the mobile camera and compared and verified with the electronic identity card. A short time later, users get their first score. This score is updated at the end of each month. The criteria and factors used for a high or low rating are confidential. However, the system takes into account about 3,000 pieces of data per person from almost a hundred government data sources (Rob Schmitz, “What’s Your ‘Public Credit Score’? The Shanghai Government Can Tell You“, NPR.org, 03.01.2017).

Even if individual factors evaluated in the pilot projects are confidential, the Chinese social credit system generally concentrates on the evaluation of four key parameters:

We have had the social credit system in our village for several years now. No matter what we do, we think about our credit points. We support the village where we can. We clean a lot and sweep the public areas. Putting garbage or even grass in front of your own door is not allowed. If someone doesn’t follow these rules, they’re considered dishonest. If the village head asks for anything, we do it. Those who keep everything clean and in order are regarded as role models. — cited in Axel Dorloff, “Sozialkredit-System: China auf dem Weg in die IT-Diktatur“, Deutschlandfunk, 09.09.2017. 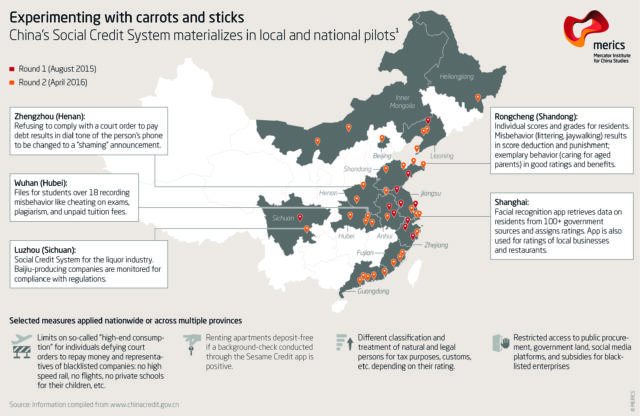 Rewards and punishments
The rewards and punishments for high or low scores currently vary from system to system. In Rongcheng, everyone starts with 1,000 points, which then increases or decreases depending on the behavior of the person concerned. The highest rating is AAA, which is at least 1,050 points; at the other end of the scale is D, which is fewer than 600 points. Persons with at least an A rating are on a red list, while those below are on a blacklist. Those on the red list are given preferential treatment for admissions to schools, for social benefits, or even when purchasing insurance. Those in the C Group are checked regularly and are subject to certain restrictions. This could, for example, result in the reduction of welfare payments. Those who appear in the lowest D Group no longer qualify for management positions, lose certain benefits and lose their creditworthiness. Another important aspect is the public emphasis on ethical role models or the condemnation of those who “betray trust”. Usually, names, photos, identity numbers, and in some cases even private addresses are published. The majority will hardly be bothered by this at the moment because about 90% of the inhabitants in Rongcheng have an A (Simina Mistreanu, “China Is Implementing a Massive Plan to Rank Its Citizens, and Many of Them Want In“, Foreign Policy, 03.04.2018).

At Alibaba, a score of over 600 leads to the possibility of taking out a small loan of around 5,000 yuan (around $700) when making purchases in its online shop. For scores 650 and higher, one no longer needs a deposit to rent a car, and you might enjoy the benefits of VIP treatment at certain hotels and airports. From 700 points, additional documents can be dispensed with on a trip to Shanghai, and for a person with at least 750 points, the procedure for applying for a Schengen visa is faster on the Chinese side. Currently, Sesame Credit does not yet seem to be imposing penalties (Rachel Botsman, “Big Data Meets Big Brother as China Moves to Rate Its Citizens“, Wired, 21.10.2017).

I’m being punished for issuing a credit guarantee for someone else. The loan wasn’t repaid and I was punished. When I wanted to buy a plane ticket, I couldn’t get one. As a result, I found out that I can no longer buy tickets. That was in November 2016. I can’t buy plane tickets or express train tickets. — cited in Axel Dorloff, “Sozialkredit-System: China auf dem Weg in die IT-Diktatur“, Deutschlandfunk, 09.09.2017.

Conclusion
The wide range of rewards should not deceive readers about the immense risks of this system. A totalitarian surveillance system is currently being established in China, which, depending on political needs, could quickly turn China into a huge prison. People on blacklists and with travel restrictions report that it is very difficult to be removed from these lists (also read Simina Mistreanu, “China Is Implementing a Massive Plan to Rank Its Citizens, and Many of Them Want In“).

However, the impact may not be limited to China. Even if a politically flavored social credit system is rather unlikely in democratic states, this does not mean that companies operating in democratic states do not want to adopt such a business model. Although China is the salient example of such a system, similar approaches can be seen elsewhere in the world. Companies have been assessing individual creditworthiness for a long time. For example: are you wondering why you can no longer get an Uber? Well, chances are you have a dismal passenger rating. By the way, Uber knows who among their customers has had a one-night-stand (Bradley Voytek, “Rides of Glory“, Uber Blog, 12.03.2012). The Danish company Deemly demonstrates how a “light” social credit system could also be marketed in Western countries. It evaluates the trustworthiness of individuals based on the evaluation of their activities on social platforms. In this context, the “Nosedive” episode in the “Black Mirror” series, a popular critique of technology and its social impact, seems to be right on the money. Besides, it should not be forgotten that internationally active Chinese companies such as Alibaba collect data not only from Chinese citizens but from all their customers (including geodata). With the rewards offered, customers are even voluntarily submitting their data.